Build the Original Pony Car From the 1960s

Construct Your Own 1 to 8 Scale Replica of the 1968 Ford Mustang GT, the Original Pony Car that Inspired a Generation and Became a Movie Icon. 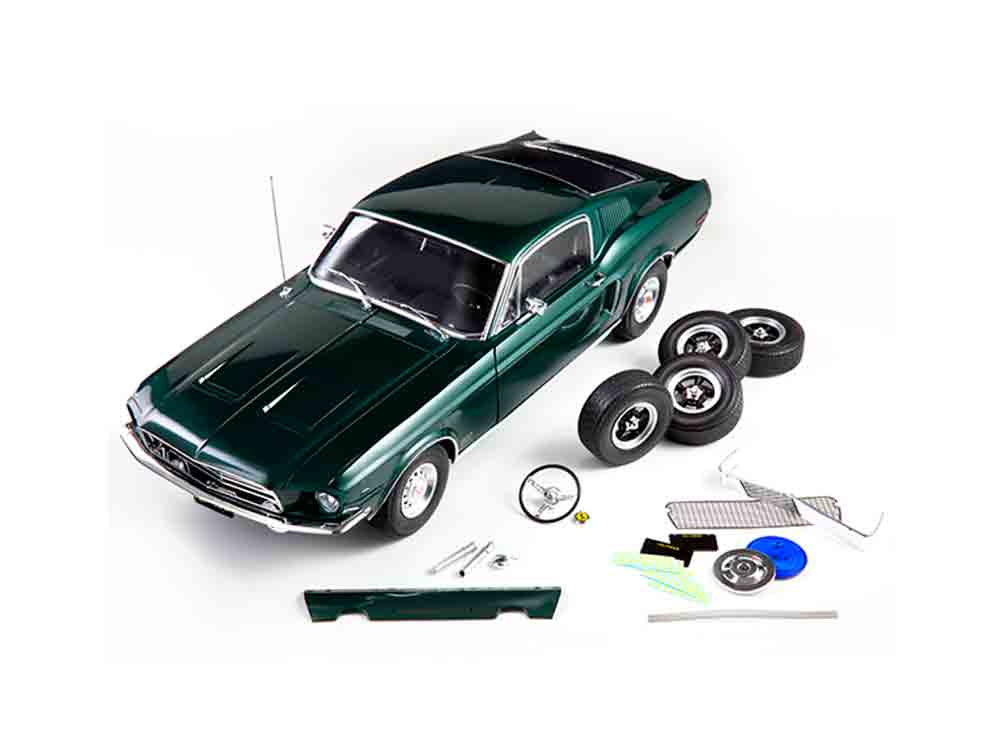 Build the Original Pony Car From the 1960s

Eaglemoss Die Cast Club, creators of ultra-detailed build-up replicas for car fans, collectors, and model enthusiasts around the world, presents a sensational scale reproduction of the 1968 Ford Mustang GT Fastback. As the original pony car, the Mustang was a super-cool model that millions of young drivers in 1960s America were desperate to own. Movie-makers soon picked up on the Mustangs appeal and cast it in films as varied as Goldfinger (1964), Gone in 60 Seconds (1974), and, of course, the 1968 cult classic, Bullitt.

Now, for the first time, Mustang fans can build a 1 to 8 scale replica of a factory-specification 1968 Mustang GT Fastback. Officially licensed by the Ford Motor Company, the model is constructed from high-quality die-cast metal, ABS, rubber, and other materials; when complete, the replica will measure more than 23 inches in length and weigh over 18 pounds.

In terms of details, the model brims with period touches, from the realistic 390cu in V8 engine to the red GT logos on the wheels and the trunk gas cap.

The many working elements on the model include

Whats more, the model comes with an optional customization kit that turns this already cool star of the Sixties into a street-smart racer. Builders will be able to replace the grille, wheels, steering wheel, and other components on their standard Mustang with performance-oriented alternatives to take the desirability of their model to another level. There is even the opportunity to personalize their license plate with whatever number and letter combination they desire.

Build the 1968 Ford Mustang GT is delivered via a unique subscription program that begins with a shipment of the first two sets of precision-engineered parts. Subscribers will also receive a full-color magazine that includes a detailed assembly guide to facilitate an easy build of the model, plus a couple of feature articles. The first looks at the Mustang in the movies, highlighting some of the main films in which the model has made an appearance from the 1960s through to the present day. With its movie-star looks, its no surprise that the Mustang has appeared in thousands of big- and small-screen productions. The second article covers the fascinating story of Fords pony cars and their influence on American automotive design. As well as the original Mustang, the feature shines a light on other sporty Fords such as the Falcon and Torino, later Mustangs, and even the marques latest electric models thatin the true spirit of a pony carcombine a compact body with impressive performance. Every subsequent monthly shipment is accompanied by another informative magazine, plus four further sets of model parts.

Over the course of the program, subscribers are sent several exclusive gifts at no extra cost, including a unique set of drinks coasters, a screw box, a display base, and a binder. Together worth over $100, these will help build and display the model, and keep the magazines together. This comprehensive subscription program is guaranteed to excite Mustang fans, model builders thrilled to be given their first opportunity to assemble a 1968 GT Fastback at this large scale, and those who appreciate the simple, understated design of the original pony car.

To find out more and subscribe to take advantage of the Die-Cast Clubs bonus offers, go #online.