In first place as the city that uses the most energy through their Christmas lights during Christmas is Milan. With a whopping 69.25 percent increase in the brightness of the city at night-time, it is clear that December festivities are running high in Italys fashion capital. 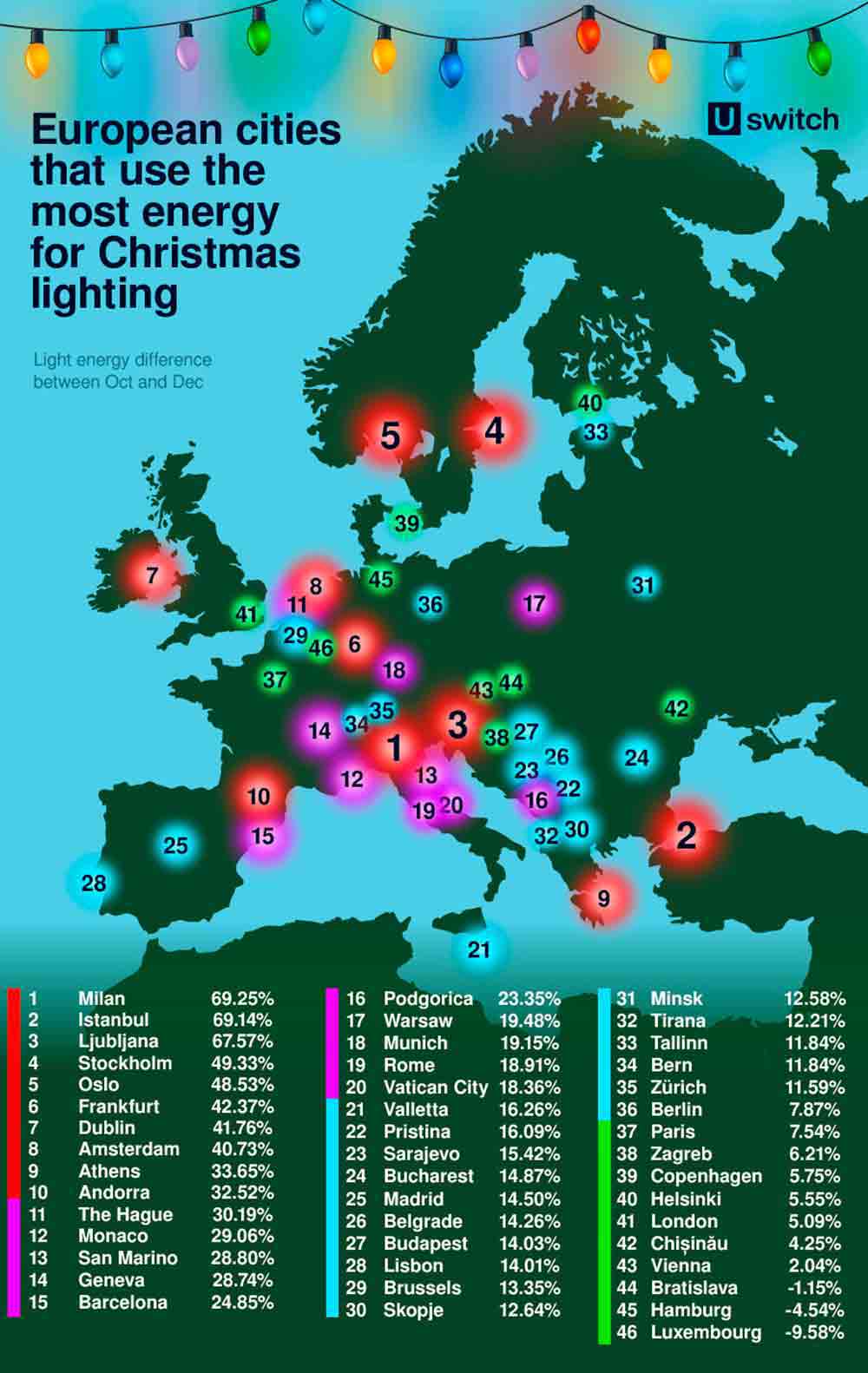 In first place as the city that uses the most energy through their Christmas lights during Christmas is Milan. With a whopping 69.25 percent increase in the brightness of the city at night-time, it is clear that December festivities are running high in Italys fashion capital. Despite recording the highest increase in energy usage overall, the Italian city comes second to Athens in average brightness during the month of December with 12 percent less light emissions.

In third place is Slovenias capital Ljubljana, with energy usage increasing 67.57 percent over the Christmas period. Even with the citys increased power usage for the festive season, Ljubljanas average brightness in October is among the lowest in Europe  only 26.2 percent of Istanbuls in the same month.

Frankfurt comes in sixth place, with a 42.37 percent increase in outdoor illumination during December. German cities Munich and Berlin also rank 18th and 36th place, with respective 19.15 percent and 7.87 percent increase in brightness. Despite Frankfurts small size  at only 27.8 percent the size of Berlin  the city ranks highest of the three cities when it comes to increased brightness emissions.

In tenth, with a brightness increase of 32.56 percent during the festive month is the principality of Andorra. Andorras brightness in October is third lowest in all of Europe, at only 6.04 nWatts·cm-2·sr-1. In comparison, Andorras neighbouring city, Barcelona, is 1258.1 percent brighter  the most illuminated European city of all analysed.

Sarah Bloomfield, energy expert at Uswitch.com/gas-electricity advises on how to sustainably light up your Christmas: »Your Christmas light display choice and size of bulbs, whether incandescent or LED, could have a significant impact on your energy bill. LED Christmas lights will consume 80 to 90 percent less energy than incandescent bulbs, so choosing these should affect your energy bill the least over the festive period.«

»Save money by turning lights off during the day when they dont have much impact, and before bed and leaving the home. You can also opt to buy lights that have a timer, which will allow you to set a schedule. Ensure you choose low energy lighting, such as LED bulbs. They tend to cost more money, but they use less electricity and last longer over time. Compare the energy rating of the lights youre planning on purchasing before you buy. This will let you know whether they have a low or high energy consumption, which will inform the impact on your energy bills.«

Uswitch.com/gas-electricity sought to determine which European cities had the greatest increase in brightness during the month of December based on outdoor night-time artificial lights. Utilising satellite data from NASAs Black Marble night-time lights dataset (VNP46A2), the increase in outdoor illumination of 46 cities across Europe was extracted.

Subsequently, Natural Earths Populated Dataset was used to reverse-geocode the night-time lights to capital cities. A 10km radius around each city coordinate was used to define the spatial range of the city.

For the purpose of this study, only main cities were included as part of the data. Exceptions were also made to municipalities (e.g. Andorra) which were also included.

The sample was then aggregated by each European city to calculate the daily average night-time lights.

Results from Vaduz, Sofia, Riga, and Vilnius were excluded from the study due to abnormally high readings that can be attributed to alternative sources of energy usage.

Following that, the final percent change of city brightness was determined from the median of the night-time lights for October and December.

The final percent changes were then ranked in descending order to discover the European city with the most increase in brightness during December.