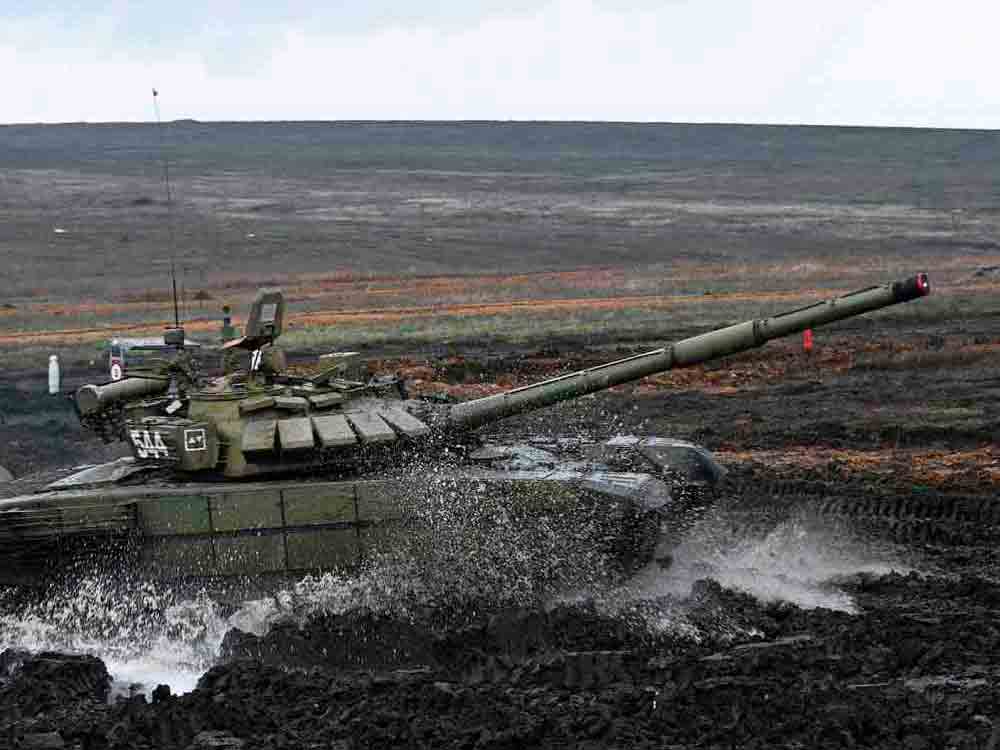 Russia denies plans to attack Ukraine, has demanded NATO stops its eastward expansion and wants the military forces of both sides to go back to where they were in May 1997

Ukraines Deputy Foreign Minister Emine Dzhaparova spoke to CGTNs Guy Henderson in Kyiv on Friday, at the end of a week in which talks between Moscow and Western states on Russias deployment of tens of thousands of troops along Ukraines border ended with no breakthrough.

Just before they spoke, the U. S. said it feared Russia was preparing a pretext to invade Ukraine if diplomacy fails to meet its objectives, following a massive cyber-attack that splashed Ukrainian government websites with a warning to be afraid and expect the worst.

Russia denies plans to attack Ukraine, has demanded NATO stops its eastward expansion and wants the military forces of both sides to go back to where they were in May 1997.

Guy Henderson: Is there a chance for diplomacy still to work?

Emine Dzhaparova: We always say that talking is better than fighting. My country has been consistently committed to the peaceful resolution. Weve been many times stressing that in different formatsbecause we do have a war in Donbass.

Its not the way Russia depicts it as if it were a civil war. Its not, its been fueled by Russia. And we have combat losses, soldiers dying every day and, of course, we are trying to find the resolution but we think that the Russian tactics are about making everyone follow their line in case we or other partners or allies are not ready for that. They then usually blame others of not being constructive and that is exactly what we see so far in terms of the previous intensive week of conversations.

So I think that by being committed to a peaceful resolution, by not wanting to have further aggression. By already having the occupation of Crimea when 2 million Ukrainians are already living in a state of  being hostages in this military base called the Crimean Peninsula.

[Russia says Crimea has always been a part of Russia in fact and became so as a matter of law after the referendum in 2014].

Its been fully militarized, theres propaganda, it is manipulation of the conscience. This change of demography is taking place. Military crimes are taking place there. When we have the Donbass war where people are dying every day.

So this is exactly what we want: a resolution by peaceful means and what weve been stressing for years, trying to find those instruments. Always better to talk than fight ... If they want to talk, they will keep going with dialogue. If they want the force scenario, they will take themselves out. And they do have all of the military capabilities to use the force scenario. And we do follow the buildup.

So far, the information we have from the Ministry of Defence is that the contingent is about 120,000 troops massed at a distance of around 200 kilometers around the borders of Ukraine. And let me stress, we have a bit more than 2,000 kilometers of common border with Russia.

Guy Henderson: A number of proposals were made last week in an attempt to try to de-escalate things. What do you see as the first, practical, realistic step that could be takento allow people to take a step back, give dialogue one more chance? It looks, from the outside eye, that were pretty close to a conflict.

Emine Dzhaparova: You cant dance tango with an aggressor. Russia has showed itself as an aggressive state in 2014. Its been eight years since we witnessed this crisis not just against our country but against international law. Just this week Secretary Blinken said its not about Ukrainethe scale is bigger. Its about the principles. What we expect and have been relaying to our partnersis that we want a three layer response.

First, an economic response. I think its important to act

Guy Henderson: You think thats a means of de-escalating?

Emine Dzhaparova: I think its a way of stopping Russia from taking more aggressive steps. I think its about raising the cost for Russia for its occupation of Crimea and the Donbass and any further action they might take.

Our diplomats have been leading the three-layered response: economic response about sanctionsnot just personal but entities in regards to the defence system which has been exploiting.

Then banking: cut off the Swift system and other means. Then the political layer: demonstrating unity that is needed. I think we did it in Geneva. Ukraine is a strategic partner, by showing this western unity that European issues cannot be discussed without European involvement. And decisions on Ukraine cant be taken without Ukraine.

And this is a consistent issue: that Ukraine is a sovereign state that fights for its territorial integrity and that is a country that could and should choose its future and is part of the western world.

And I think the movesparticularly since 2014are to have our own future. We have cut the belly button with Russia in 2014. And its about us being reborn as a nation and the basis for this is different things like language, army, foreign policy.

In terms of our goals, there are two things now in our constitution: fully fledged members of the EU and NATO. Third states cannot dictate the conditions under which this or that country could be allowed.

The basis of the NATO policy is open-door. No one can shut the door for member states.

Thirdsecurity. The security of Ukraine is the security of Europe. And we communicate that we are protecting ourselves not just as a country but as a European front.

So, for us what is needed is actually weaponry that weve been requesting. We are ready to do what weve already been doing for eight years.

Guy Henderson: Is that support increasing?

Emine Dzhaparova: That is what were trying to talk about as the support that we need. This is about having this three-layered response: political, economic, military or security. By having Ukraine more prepared for a possible military scenario means its about making Europe more prepared.

Guy Henderson: There are those who say, in practice, Ukraines chances of joining NATO are actually quite remote, particularly at the moment. Why is retaining that righteven if its just in principleso important, even when the practical costs could be so severe?

Emine Dzhaparova: Its evident. The basis of any alliance or union or platform is about being open. If we talk about NATO, its an open-door policy, which means that countries decide if they want to.

If you look at the polls that have been taken in Ukraine, there is support in society for this choice. Its not something taken out of the air. Its something that the people want. We have 59 percent of the Ukrainian population supporting NATO. I think its higher, 70 percent, for joining the EU.

This is the basis of interaction. This is between NATO and Ukraine. There shouldnt be some chauvinistic other country deciding what we can and cannot do. If we are not able to protect this principle, I think we have to ask questions about whether we can help ourselves further.