Ahead of their inaugural race, MDK Motorsports has announced their driver line-up for the 2022 season. The seven current team members encapsulate the range of drivers who can be seen on the best tracks throughout the country: motivated by accomplishment and passion, be they wise or prodigies. 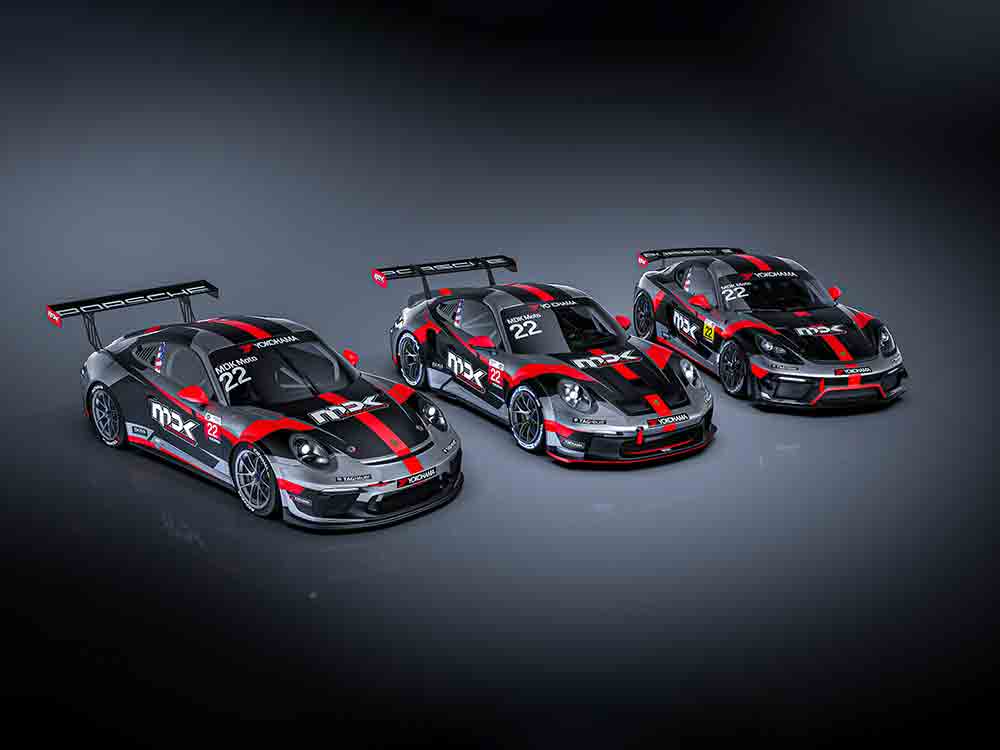 Ahead of their inaugural race, MDK Motorsports has announced their driver line-up for the 2022 season. The seven current team members encapsulate the range of drivers who can be seen on the best tracks throughout the country: motivated by accomplishment and passion, be they wise or prodigies. This season, the drivers will be competing in the Porsche Carrera Cup North America and Porsche Sprint Challenge North America series.

"We are proud of the drivers racing under the MDK flag this year and honored to welcome their families and guests for a one-of-a-kind experience," said team CEO Megan Kvamme. "This endeavor required a fast and furious year of preparation, and we knew from the outset that we needed to have a diversity in experience and perspective among our drivers in order to be the dynamic team that we set out to be."

The rest of the team comes with similar enthusiasm to the upcoming season. "It is always exciting being able to be part of a new team and expand my racing experience. While this is MDK's first sports car race season, they spent the last year putting together a great group of people in the program that will bring instant success. I look forward to testing and taking my first green flag in the Porsche Sprint Challenge in the GT4 class, but also helping to grow a program from the ground up," says driver Christian Weir.

"I see MDK Motorsports as an opportunity to take my driving and my ideals to the next level. The connections that MDK offers and the values that the team personify hit the sweet spot for me," said driver and tech entrepreneur Zoë Barry. "Seeing a woman-run motorsports team on the inside track helps to change the experience for all women drivers, spectators, and the sport as a whole. I am not just getting an affiliation here; it feels more like a community."

Zoë is a serial tech entrepreneur. She got her start racing after venture capitalists invited her to their track days, and she knew she had found a new passion. After joining Monticello Motor Club in 2017, Zoë raced in a Mazda MX5 Global Cup car, placing 1st in the Resort World Challenge and 3rd at the Queally Mazda Classic in 2020. In 2021, Zoë consistently captured top tens in her Porsche 718 GT4 series. Zoë is now driving in her first pro-am GT4 series in the Porsche 718 with MDK racing in 2022. Investors no longer invite her to track days.

Trenton Estep is an American professional racing driver. Estep grew up racing karts from the age of 4 years old in New Braunfels, Texas. He competed in various karting competitions such as SKUSA Pro Tour, Florida Winter Tour, US Open, and Rotax Grand Finals in Portugal. In addition to his karting titles, he is a two-time Formula Ford Champion and the 2018 Porsche GT3 Cup Challenge USA Champion.

Jean-Francois is a French doctor turned venture capitalist. He resides in Boston with his wife, Zoë. They became members of the Monticello Motor Club in 2017 where they began their racing hobby in Mazda Global Cup car club races. Jean-Francois is also an avid skier and wine enthusiast.

As a successful investor and entrepreneur away from the racetrack, Kvamme is the team owner. Before competing in sports car racing, Kvamme previously ran a successful KTM Supercross factory team for five seasons in the two-wheel racing world. He then joined the four-wheel ranks by participating in IMSA-sanctioned series such as Porsche GT3 Cup Challenge and Lamborghini Super Trofeo, in addition to the top-tier IMSA WeatherTech SportsCar Championship and IMSA Michelin Pilot Challenge. Kvamme's resume also boasts a podium finish in the prestigious Rolex 24 At Daytona in 2017.

Dominican driver Jimmy Llibre brings decades of experience to international motorsports. His most recent achievement was a victory at the 2020 Porsche Sprint Challenge Central Europe against more "seasoned" drivers, demonstrating once again that he was born to be a Grand Champion.

Following an international career in the food and beverage industry, Terry returned to his family roots turning wrenches on race cars in 2015. He brings racing experience ranging from NASA to IMSA with sedans through prototypes, as well as a stint managing his own race team.

In 2021, after three consecutive karting championships at Autobahn Country Club, Christian Weir got behind the wheel of a race car at 14 years old. In his first year of racing, he secured the FRP Pro 4 Championship, scored many wins in the Radical Cup, and once he was eligible, at 15, for the US F4 Championship, he managed to immediately grab a couple of podiums. He jumped into the backend of the 2021 Road to Indy USF2000 season, setting the tone by capturing top tens, a fastest lap, and the AiM Move of the Year award. He will complete a full season in the USF2000 in 2022 with Turn 3 Motorsports aiming for the top step of the podium.