Where to eat the best falafel in the world study reveals

Falafel is famously known as one of the most popular and iconic street cuisines and is enjoyed and replicated all around the globe. 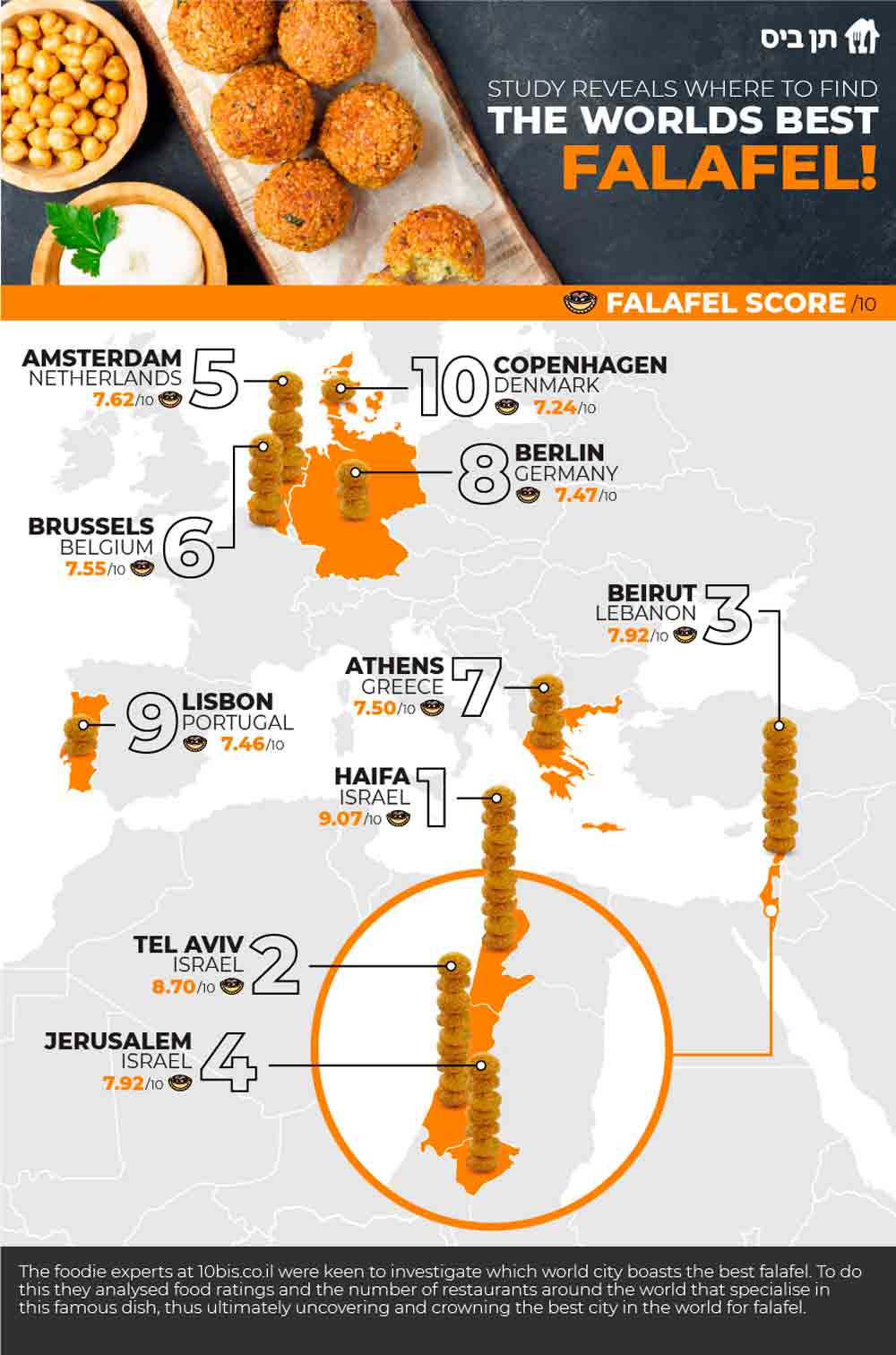 Where to eat the best falafel in the world study reveals

Falafel is famously known as one of the most popular and iconic street cuisines and is enjoyed and replicated all around the globe. The Middle Eastern recipe is packed with fibres, rich in protein and antioxidants, making it the ultimate tasty veggie dish and seeing an estimated 1.5 million monthly google searches globally, the highest volume coming from the US, Germany and France.
This inspired the foodie experts at 10bis.co.il to investigate which world city boasts the best falafel. To do this they analysed food ratings and the number of restaurants around the world that specialise in this famous dish, thus ultimately uncovering and crowning the best city in the world for falafel.

The Middle East is the best region for falafel

10bis.co.il can exclusively reveal Haifa was given the highest falafel score of 9.07 out of 10, thus being crowned the city with the best falafel.) Despite offering the tastiest falafel of all cities analysed (4.67/5 falafel rating), the city only has 659 restaurants specialising in the dish, the lowest number in the top 10.

Taking the second spot is Tel Aviv, with a falafel score of 8.70 out of 10. Interestingly, the study revealed that Tel Aviv has more than double the restaurants specialising in falafel that Haifa with an impressive 2,309 venues, the highest of the top five.

Following closely behind is Jerusalem in fourth place with a score of 7.92/10. Jerusalem has 9.36 percent of restaurants specialising in falafels, putting it ahead of fellow Israeli cities; Haifa (3.95 percent) and Tel Aviv (2.56 percent).

Placing fifth is Amsterdam in the Netherlands with a 7.62 overall falafel score and impressive 102 restaurants specialising in falafel, the third highest out of the top 10. Taking the sixth spot is Brussels in Belgium with an impressive falafel score of 7.55/10, considering only 2.17 percent of the restaurants analysed specialise in falafel.

Rounding off the top 10 cities with the best falafel is Copenhagen in Denmark, with a falafel score of 7.24 out of 10. The Danish capital has more than 43 percent more restaurants specialising in falafels than Haifa, even though it scored 20 percent less points in the overall results.

10bis.co.il can reveal that the city with the most restaurants specialising in falafel is Sao Paulo (Brazil), with 39,158 spots for those who love the dish ranked 44th in the overall study (add Sao Paulo overall score).

Behind Sao Paulo is London, ranking 15th in the overall study and with 97 percent more restaurants serving falafel than Haifa. he third city with the most falafel specialising places is Istanbul with 22,440 restaurants and ranked 47th.

When it comes to the city offering the tastiest falafel, it was revealed Haifa has the highest rated falafel review rating at 4.67/5, with Athens in Greece following shortly behind 4.60 out of 5.

* All overall falafel ranking scores were ranked from highest to lowest and rounded up to two decimal points.