A new nanomaterial for precision medicine and the green transition

In Nature Communications: the Politecnico di Milano study that synthesised a nanocluster of superfluorinated gold for the first time. 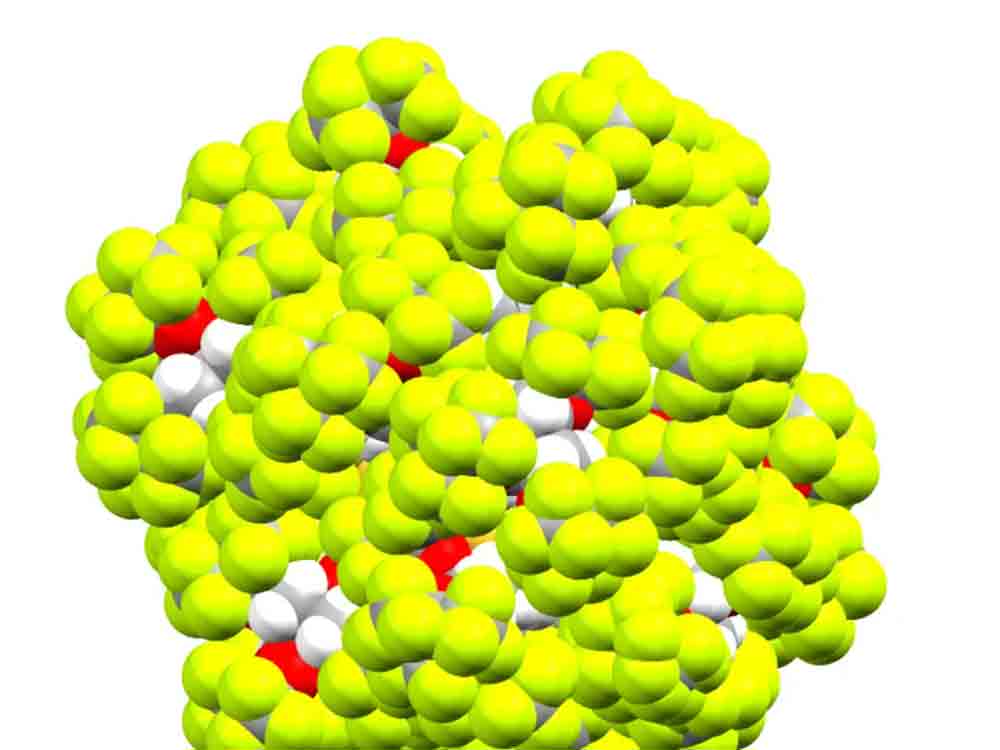 A new nanomaterial for precision medicine and the green transition

In Nature Communications: the Politecnico di Milano study that synthesised a nanocluster of superfluorinated gold for the first time.

The Supra #Bio #Nano Lab (SBNLab)at the Politecnico di Milanos Department of Chemistry, Materials and Chemical Engineering Giulio Natta, in partnership with the University of Bologna and the Aalto University of Helsinki (Finland) has, for the first time, synthesised a superfluorinated gold nanocluster, made up of a core of only 25 gold atoms, to which 18 branch-structured fluorinated molecules are linked. The project was recently published in the prestigious Nature Communications magazine.

The metal clusters are an innovative class of very complex nanomaterial, characterised by ultra-small dimensions (less then 2 nanemetres) and peculiar chemical-physical properties such as luminescence and catalytic activity, which encourage its application in various scientific fields of high importance in relation to modern global challenges. These include precision medicine, in which metal nanoclusters are used as innovative probes for diagnostic and therapeutic applications, and the energy transition, where they are applied as efficient catalysers for the production of green hydrogen.

The crystallisation of metal nanoclusters offers the possibility of obtaining high-purity samples, allowing their fine atomic structure to be determined; however, at present this remains a very difficult process to control. The methodologies developed in this study promoted the crystallisation of nanoclusters, allowing their atomic structure to be determined by means of x-ray diffraction at the Sincrotrone Elettra in Trieste. The end result is the structural description of the most complex fluorinated nano-object ever reported.

Thanks to the presence of a completely fluorinated shell, containing almost 500 fluorine atoms, the gold nanocluster is stabilised by the numerous interactions between the fluorine atoms of the binder, encouraging crystallisation, states professor Giancarlo Terraneo.

It will soon be possible to study the structure of these advanced nanomaterials at the Politecnico di Milano, wherethanks also to the grant from the Region of LombardyNext GAME (Next Generation Advanced Materials), a laboratory dedicated to the use of state-of-the-art x-ray instruments to characterise crystals, nanoparticles and colloids, is being established, concludes professor Pierangelo Metrangolo, on behalf of Next-GAME.

The interactions between the fluorine atoms both within the nanocluster and between the nanoclusters were rationalised using quantum chemistry techniques at the University of Bolognas G. Ciamician Chemistry Department by Dr Angela Acocella and professor Francesco Zerbetto.

The University has always focused on the quality and innovation of its teaching and research, developing a fruitful relationship with business and productive world by means of experimental research and technological transfer.

Research has always been linked to didactics and it is a priority commitment which has allowed Politecnico Milano to achieve high quality results at an international level as to join the university to the business world. Research constitutes a parallel path to that formed by cooperation and alliances with the industrial system.

Knowing the world in which you are going to work is a vital requirement for training students. By referring back to the needs of the industrial world and public administration, research is facilitated in following new paths and dealing with the need for constant and rapid innovation. The alliance with the industrial world, in many cases favored by Fondazione Politecnico and by consortiums to which Politecnico belong, allows the university to follow the vocation of the territories in which it operates and to be a stimulus for their development.

The challenge which is being met today projects this tradition which is strongly rooted in the territory beyond the borders of the country, in a relationship which is developing first of all at the European level with the objective of contributing to the creation of a single professional training market. Politecnico takes part in several research, sites and training projects collaborating with the most qualified European universities. Politecnico's contribution is increasingly being extended to other countries: from North America to Southeast Asia to Eastern Europe. Today the drive to internationalization sees Politecnico Milano taking part into the European and world network of leading technical universities and it offers several courses beside many which are entirely taught in English.